Hi, this is arasan01 (@arasan01_me). I installed a branch faucet in my dishwasher and it's so comfortable that I eat fried food more often.

When using Xcode on an Apple Silicon Mac (M1 Mac) to build a project for the actual device and for the simulator, the build succeeds for the actual device, but when building for the simulator, it says "building for iOS Simulator, but linking in object file built for iOS, for architecture arm64" error. This is because the library used internally is not compatible with Simulator, which is used by Apple Silicon Mac's Xcode.

Specifically, Xcode and Simulator run on x86_64 architecture on Xcode running on Rosetta2 as well as on Intel Macs, whereas Xcode and Simulator run on arm64 architecture on Apple Silicon Macs in the normal boot method architecture. If you look at the libraries used internally, the above error occurs when there is an arm64 build for the machine and an x86_64 build for the simulator included in the package. On the other hand, normal startup fails because the arm64 simulator build cannot be found.

In contrast, tools existed to generate xcframework from frameworks. However, it is complicated because it requires rearrangement of the workflow. Therefore, we created a tool that can dynamically select the library itself.

To use it, simply write the binary you want to switch between builds for the arm64 simulator and builds for the real machine in a configuration file and add it to the Build Phase Script of your project. The configuration file must specify whether the binary is a static link or a dynamic link. You can use file -b <binary path> to check. If you have a mixture of architectures, you will see various results, but the following should be included.

When you use it, please use the build in Mint or SwiftPM.

The tool uses json files to manage which binaries to target. In this case, the Framework is placed at the top of the project, so it is described as follows. 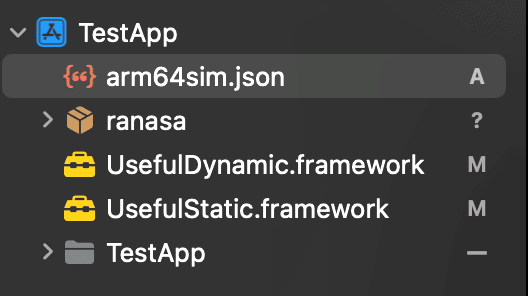 Write the code that calls ranasa in the Build Phase Script.

For more detailed options, see the help of the command or refer to the README of the repository. 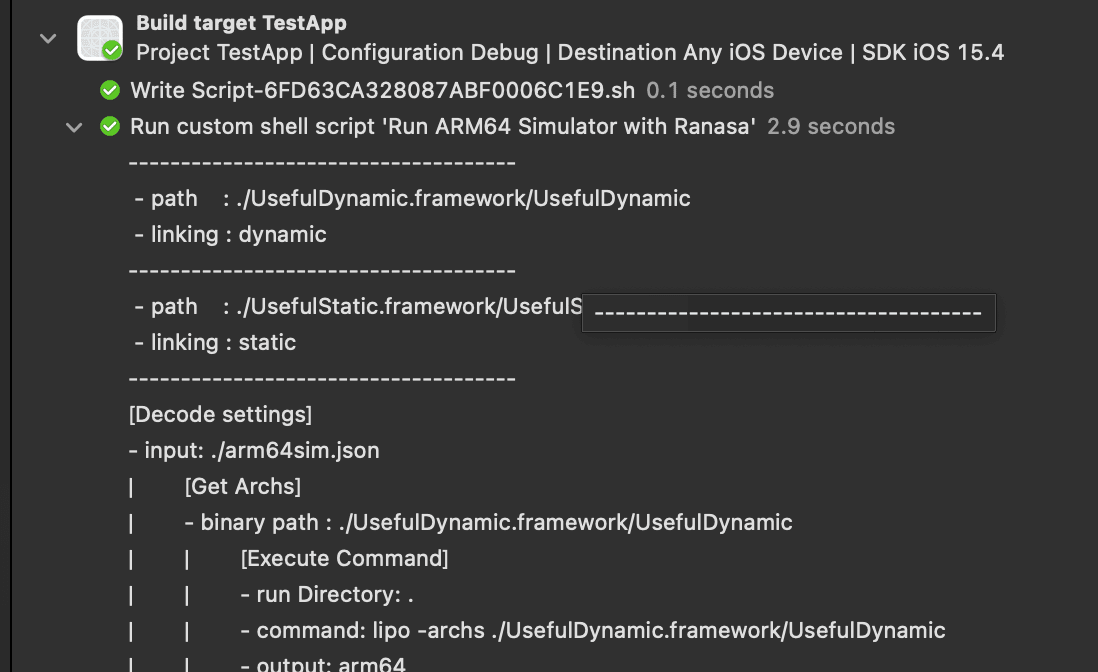 I think it would be good to try to use it so that it can be freely forked and used for projects, although it may fail if swiftmodule is present, or its behavior may be unstable sometimes, or various other problems. I have confirmed that it works normally with Static Library, but other than that, I didn't have any particular goal to use it, so I may not have debugged it enough.

Popular posts from this blog

I am preparing to become more active in personal activities.

February 17, 2022
Hello, this is arasan01_dev. As a result of various motivations after a long time, I've decided to strengthen my output related to programming technology. Recently, I've been working on my Youtube channel and technical input to prepare for starting my own Youtube channel for Japan and overseas. This blog is mainly about what I've been doing and working on, and I may also write transcripts of my talks on Youtube.
Read more

Introduction. Who are you? Hi, I'm arasan01_dev ( @arasan01_dev ). I've been thinking about starting youtube lately, and when I was thinking about stuff, I created a plugin for Flutter for windows. I thought I would have to prepare a lot of things when I started my activities, so I got the domain name arasan01.dev , which was just right because the domain name is required to register a publisher on the "pub.dev". I got the domain name from Google Domains, so the "pub.dev" authentication was fast because it was in Google. I'm pleased about that. I've been away from Flutter for a few years now, having only tried it out for iOS and Android development, and came back when I heard that it could be used for Windows development. So my experience with Flutter development is almost zero. I usually develop iOS apps (Swift is good). What did you make? Flutter for windows, as is, cannot receive files by drag and drop. Of course, you can
Read more